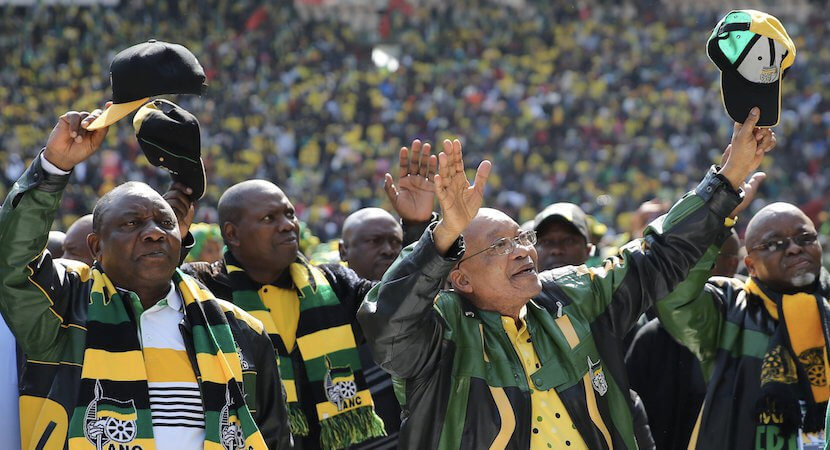 CAPE TOWN -- A High Court ruling in Pietermaritzburg next month could cast the die for who becomes the ANC's next President and thus leads the country. That's how important the court application by a KwaZulu-Natal 'reformist' ANC group is to have the party's 2015 provincial election result overturned. Victory could see the back of one of Zuma's most influential factions in a province where he has historically held sway. Of course, they need at least some of the so-called Premier League provinces to play ball. In the Free State, another, much longer-shot reformist challenge is being mounted against the wily premier, Ace Magashule, by his deputy Thabo Manyoni. Magashule is widely regarded as the ace in the Premier League pack. According to his aspirant replacement, it's not pretty. Manyoni says he's received death threats. His opponents are playing dirty, he says, an indication, of their desperation. Thankfully, he hasn't backed off, citing his struggle years where people were prepared to pay with their lives for liberation. I bet he never thought he'd be prepared to die fighting oppression by a greedy, self-serving faction of his own party that has sold out a Freedom Charter written in blood by fellow guerrillas. – Chris Bateman

(Bloomberg) — Death threats and court challenges mark an intensifying battle for control of South Africa's ruling African National Congress as factions fight it out in the nation's provinces before the party elects a new leader to replace Jacob Zuma.

In the region with the most ANC members, KwaZulu-Natal, the high court is expected to rule next month on an application by party officials to overturn an 2015 election of provincial leaders allied with Zuma following what they say was a flawed process. In Free State, deputy party chairman Thabo Manyoni is seeking to replace his boss, Ace Magashule, another supporter of the president who's led the ANC in the province for 23 years.

Whoever wins the battles will go to the December ANC leadership conference as the favorites to determine South Africa's political future. The pro-Zuma forces are campaigning for former African Union Commission Chairwoman Nkosazana Dlamini-Zuma, and the president's ex-wife, to take over the party, while Manyoni and officials behind the court challenge in KwaZulu-Natal are backing the other main contender, Deputy President Cyril Ramaphosa.

"If the outcome of the 2015 election is overturned, it would be a major, major fight and could turn things around, away from Zuma's ANC, and therefore away from Dlamini-Zuma's campaign," said Susan Booysen, a political science professor at the University of the Witwatersrand's School of Governance in Johannesburg. "The court case is a major decider, not just for the ANC but for South Africa's future elections."

Manyoni, 57, says the bitterness surrounding his campaign for Free State's most powerful political position shows what is at stake.

"There are death threats," Manyoni, a former ANC guerrilla fighter who wears a Che Guevara cap, said in an interview. "I'm not going to back off; the ANC is the only home I know. When I fought the apartheid forces during that time, I knew I might not see tomorrow."

Hanekom says they will campaign to ensure better ANC leadership elected in December to fight the rot. #StateCapture

Victory by Manyoni in elections set for next month would be seen as evidence of the disintegration of a group known as the Premier League that consists of the leaders of Free State and two other rural provinces and has helped keep Zuma in power and backed Dlamini-Zuma's leadership campaign.

Yet, whether he can defeat a skillful political operator like Magashule is doubtful, according to some political analysts.

"If Manyoni wins, which is highly unlikely to happen, that would be a blow for Dlamini-Zuma," according to Ralph Mathekga, a political analyst at the Mapungubwe Institute for Strategic Reflection, a Johannesburg-based research group. "The Free State is very interesting in the sense that the current chair appears to be the strongest leader of the Premier League."

The group is made up of Magashule, David Mabuza, premier of Mpumalanga and their North West province counterpart, Supra Mahumapelo. The three provinces, with about 29 percent of the ANC's membership, according to the party's latest figures, are closely allied to the leadership of Zuma's home province of KwaZulu-Natal, which represents 20 percent and should send the most delegates to the leadership conference.

3 in 5 South Africans are poor. #ThaboMbeki says the growth in the number of people living in poverty is the result of failed ANC leadership

The party is in turmoil because of the scandals that have shadowed Zuma, 75, during his eight-year presidency. The Constitutional Court found that he violated his oath of office by failing to repay taxpayer funds spent on his private home.

The nation's graft ombudsman accused him of allowing members of the Gupta family, who are in business with his son, to influence cabinet appointments and the award of state contracts. Zuma and the Guptas deny wrongdoing.

The economy has also suffered, with the nation falling into a recession this year, unemployment at a 14-year high and business confidence close to a three-decade low.

"The ANC was formed by people who were caring for those who were less fortunate and not this thing of today of this 'bling bling' you see all over," Manyoni said. "We need to change from the grassroots upward."

While Zuma has escaped censure because he's retained the backing of most of the ANC's top officials who rely on him for their jobs in the government and cabinet, his leadership has opened up deep divisions within the 105-year-old party and eroded its support. The ANC lost control of Pretoria, the capital, and Johannesburg, the economic hub, in municipal elections in August last year.

"Already the message is clear," Manyoni said. "We have seen it through our local government elections that we really must change. There's no other way; we have to change."