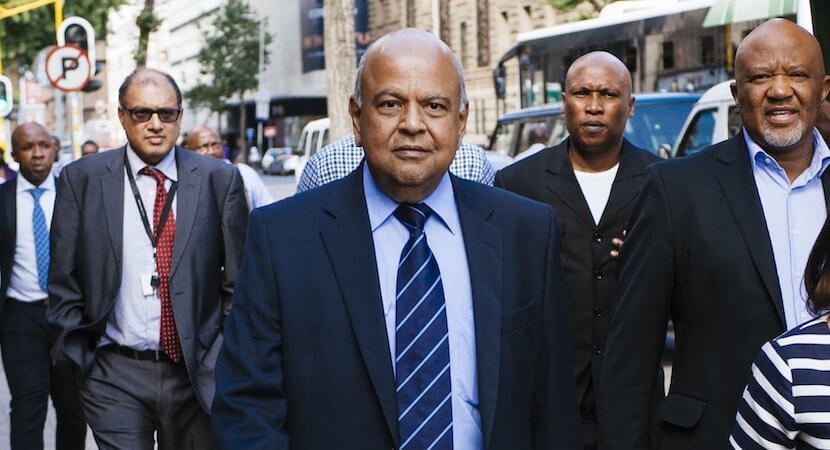 JOHANNESBURG -- It’s official. A South African court has confirmed what was probably already obvious: that a Finance Minister can’t interfere or step in with the relationship between a bank and its client. On Friday, Tshwane’s North Gauteng High Court dismissed former FinMin Pravin Gordhan’s court bid to seek relief in the matter regarding South African banks’ closures of Gupta bank accounts. At first glance, the dismissal looks like a loss for Gordhan, but it actually isn’t. The court today, in its dismissal, clearly stated that it is expected by law that a FinMin should not be interfering in the relationship between banks and their clients and that therefore the matter should not have been brought to court in the first place. Oakbay itself even conceded this, but the court has still had strong words for Oakbay today, saying that the Gupta owned company still put pressure on Gordhan to act. Cleverly, the court has also distanced itself from meddling in running the country. Therefore it has, in effect, rubber stamped Gordhan’s views on the matter. It’s a pity that Gordhan is FinMin no more. This is a bittersweet victory for him. – Gareth van Zyl

Johannesburg – A court has ruled that former finance minister Pravin Gordhan’s application seeking declaratory relief from having to intervene with the banks has been dismissed.

So court declined to rule on Gordhan application about Guptas interfering because what he asked it to do is already settled law.

Judge Aubrey Ledwaba read out the order at the North Gauteng High Court on Friday.

The application was dismissed, with costs to be carried by the Minister of Finance, Ledwaba said.

The application for extended relief sought by Standard Bank was also dismissed in favour of Oakbay group. ABSA, FNB, Nedbank, the governor and the registrar of the Reserve Bank and the director of the Financial Intelligence Centre will also have to bear their own costs.

Gordhan lodged the application in October last year. The matter was heard in March. Oakbay had approached the minister to intervene when four major banks, Standard Bank, ABSA, FNB and Nedbank closed its accounts.

Gordhan wanted the courts to rule that he could not interfere with the banks’ decisions.

The court viewed the application by the minister as “unnecessary”. “We hold the strong view that this application was clearly unnecessary in the circumstances of this case. Such circumstances do not warrant that the court exercises its discretion to grant the declaratory relief by pronouncing itself on an undisputed legal question, which has previously been confirmed in judgments.

High Court has stated Fin Minister has no legal power to intervene in Gupta bank dispute.But says this is settled law, no need for order

“It is not appropriate for a member of the National Executive to draw the judiciary into the exercise of his executive functions as evidenced in this application,” the judgment read.

“To grant the minister the declaratory relief would allow the judiciary to stray into the exercise of executive functions where the circumstances do not warrant this involvement.”

Constitutional law expert Professor Pierre de Vos‏ tweeted: "So court declined to rule on Gordhan application about Guptas interfering because what he asked it to do is already settled law."